I was asked to come in and work with small groups (4-5 students) in Kindergarten today using ten-frames. The teacher wanted students to unitize by 5, 10, and 15, counting on the rest by ones. For example, if I asked a student, “How many do you see? How do you see them?”, she wanted the students to understand that you could find the value in a variety of ways. Here are a few of the anticipated answers she wants them to give by the end of the year: 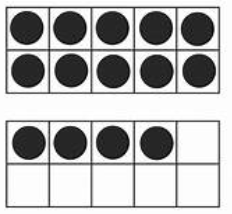 I had a deck of ten- and double ten-frame cards, so I decided to do some “quick shows”.  I would show a card to the kids for about 5 seconds, and they had to ‘think’ about their value (versus just shouting out the number). We rotated who gave the value first, but every child had to give the value they thought was on the card. I chose a different student to explain how they got the value, then gave every other student a chance to share their thinking. We did this for about 15 minutes per group of 4-5 students.

Here are our ah-ha’s:

What I loved about this activity was that I had 15 solid minutes to informally assess each child. I heard what they understood and where they struggled. I was able to note for the teacher which cards each child got quickly, and which he/she reverted back to counting by ones (or guessed). Every child was engaged and had to listen to their friends as each shared out their strategy. And most important to me, every child left my group smiling, asking when I was coming back to do more “quick thinking”.

For double ten-frame cards: We made them by cutting/pasting two ten-frames together. I am sure you can buy the cards, but this was cheapest for us.

One thought on “Quick Shows With Ten-Frames”