I have the honor of working one-on-one with a couple of kiddos in my neighborhood. One young lady (we will call her L) in particular LOVES doing number talks with me. She is brilliant but has a difficult time memorizing facts. And, like so many of our children in this country, since she can’t do her math facts quickly, she gets frustrated and just doesn’t do the math. Number talks have freed L with numbers. She has been given liberty to work them the way that make sense to her. It may take a second or two longer, but the creativity and use of properties (unbeknownst to her) she uses far exceeds the simple memorization of basic facts.

A few days ago I went over to L’s home to work with her on number talks (see below for more information). We had to change our agenda, as she was given over 20 problems involving perimeter. (TEACHER NOTE!!! I get it; we want to provide practice for students to understand what perimeter is on lots of different polygons. However, if that is the purpose, then choose friendly numbers so students who struggle don’t get caught up in the arithmetic and can focus on the concept.) L was not happy about it; she was waiting to do the math she loves and is good at. The homework is not something she intended to do with Miss Jen.

I pulled out my whiteboard and explained we would still do the number talks, but through the homework problems. We started with the ‘easy’ ones; ones that she felt confident she could do in her head. Note: L loves using a number line (visual learner) and chose to do most of the friendly number problems with that model.

Then we got to the ones with a 9 in the ones digit.

In fact, it was a regular hexagon with a side length of 9 units. Now if L knew multiplication, that would be great, but adding 6 of the 9’s would not be easy. So we discussed what is an easy number to use instead of 9. “10! Oooh I can do six tens (60) and subtract 1 for each ten I used!” She loved it. She even applied it to the hexagon with a side of 19 units. “I can make them 20 and subtract 1 for each 20! Easy!”

L was even able to create friendly problems out of 16’s. “I can use a 15 and add 1 to each. That is simple.” It was honestly more fun to do the difficult problems than the mental math ones, simply because she had control of the numbers to use. 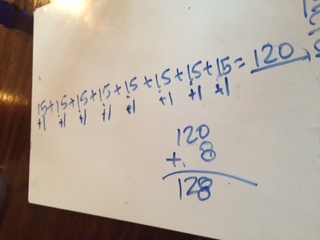 So what mathematics was supported beyond perimeter? She was able to decompose numbers and recompose them. She understood that she could use different strategies and models depending on the number choices. I think the most important piece was that she had control. She wasn’t a robot, doing a ton of problems the same way. She controlled the numbers being used, confined only to the conservation of the original number. So for example, instead of using a 6, she used a 5, but knew she needed to add one for each five she used to conserve the given 6.

As parents, this is not our normal. But why not let it be their normal? Let them explore and find ways to add and subtract numbers to make it easier. After all, our standard procedures stem from mathematicians playing and exploring with numbers until he/she found a pattern that worked everytime. Why not let your child be a little mathematician and explore for himself/herself? 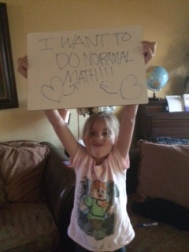 Note: The pic of L is her final message to me before I left.  Her normal is not our normal; her normal is way more fun (as math should be!).